The President of Ireland Michael D. Higgins will open the International Association of Language Commissioners Conference in Galway next month. The President has demonstrated a big interest in language rights and people will look forward to his oration. It was also announced that Mr Justice Adrian Hardiman of the Supreme Court has agreed to give the conference address on the opening night.

The first such conference was held in Dublin in 2013 and led to the fourmation of the Association. Details of this Conference may be seen here!

An Coimisinéir Teanga Rónán Ó Domhnaill said “It’s a huge honour for Oifig an Choimisinéara Teanga that two guests so recognised with language rights are willing to attend this event.”

The conference is being organised by Oifig an Choimisinéara Teanga in conjunction with NUI, Galway and is part of the State Centenary Programme. “There will be an opportunity throughout the year to reflect on the aims upon the State’s foundation. Central to this reflection will be our national language and its place in today’s society” said An Coimisinéir Teanga.

The conference takes place for March 7th to March 9th. The opening night will be in NUI, Galway and the events on Tuesday and Wednesday will take place in the Galway Bay Hotel. There is free entrance to the conference but places must be reserved beforehand by contacting Oifig an Choimisinéara Teanga. 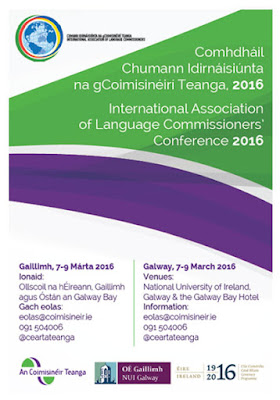