Bring back the tally stick!

Bar worker leaves his job on receiving warning not to speak Irish.

I had Raidío na Gaeltachta on shortly before lunchtime today. I wasn't really listening to it it was just on when I suddenly heard something that I thought had been banished with the arrival of independance. The banning of the use of the national language.

The programme was Saol ó Dheas, which is an hour of programming from the south of the country every day. (I usually listen to the programmes for the West since I live there but I usually leave the radio on while working and sometimes, as in this case, I hear something that attracts my attention from the other areas like later today I was transfixed by the Haka on Rónán Beo - and he was - look at his Facebook page if you don't believe me!)

Cormac Ó Bruic is a young man working in Cork city. Apparently he was forbidden from speaking his own language in his place of work, a language which is the National Language. This man is from an Irish speaking area. He was wont to speak with another member of staff from his home place in their language and also with others in the staff who were able to use Irish. He was puzzled that somebody in Ireland would insist that he desist from using this language.

He found it totally incomprehensible that, as was alleged, a complaint was received because he used his own language.  His own experience was that customers appreciated and indeed were delighted to hear it been spoken and he often spoke it with customers who had some familiarity with it or who were from Gaeltacht areas.

When contacted by the programme management stated that he had been warned about speaking Irish and thay as they employed several nationalities and that chaos would ensue if they all spoke in their own language. It did not matter if it was the National language as  ‘English-speaking business!"

Cormac could not fathom, nor can he yet, this attitude. "I would not work in that place again!' he declared.

The establishment in question, Cork's The Flying Enterprise, was also contacted by the Radio station and an incredibly narrow minded viewpoint was shown by the management there.

People must speak a certain language in the same way as they must wear special clothing in the bar. There was a "Language Code" in use in this tavern, “because it is a hospitality business”. When he was reminded by the interviewer that Irish is the national language of Ireland the reposte was "We're all Europeans!"

Maybe this attitude will change when that nation, whose language English is, leaves the European Union!

Note on the tally stick: 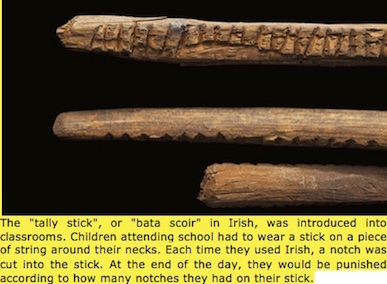