Recently the Coimisinéir Teanga was interviewed on an RTÉ station about an international conference he is involved in organising for Dublin in May. The main points of this important event are bullet pointed below. This is yet another way of celebrating The Gathering this year and also marking the celebration of Bliain na Gaeilge.

• Official Languages Act (2003) enacted 10 years ago and the legislation is currently under review. 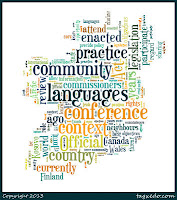 • Language commissioners from all over the world to attend and participate in the conference.
• Representation from Canada to Kosovo and Finland, from the Inuit community of the Arctic to our neighbours in Wales and Scotland.
• Emphasis on the role of the state and the community in regard to language rights and obligations in the context of languages that are under threat as community languages or languages of choice.
• The sharing of best practice, the exchange of information and lessons learnt in the area of languages will be core objectives of conference.
• The conference will provide an opportunity to learn from policy and practice in other countries and allow the position of Irish, both in the Gaeltacht and throughout the country, be evaluated in an international context.