Comhdháil Náisiúnta na Gaeilge was established in 1943. Its role is to act as a coordinating body for voluntary Irish language organisations. (The National Youth Council of Ireland and The Irish Congress of Trade Unions are similar umbrella organisations).

Gaelport.com was the leading Irish language news and information website listing Irish classes, Irish job vacancies and Irish language events. It was a project of the Comhdháil funded by Foras na Gaeilge. As such it was an award winning news site for Irish speakers and indeed those whose Irish was a little rusty as a lot of the material was in two languages.

In January of this year, Foras na Gaeilge announced the six organisations chosen to partake in their new funding model. As Comhdháil Náisiúnta na Gaeilge, the organisation who runs Gaelport.com along with many other projects, was unsuccessful in its efforts to secure a place among the six lead organisations, there remained no option for the Board of An Chomhdháil but to cease the employment of its six staff members in light of its core-funding being completely cut.

It had been hoped to transfer the bulk of the work, including gaelport.com, carried out by the Comhdháil since 1943.  With their almost almost 71 years of experience they were hampered by the fact that successful organisations were unsure of the resources which would be allocated to them after 30 June 2014. This may still be the situation. (While writing this we understand that Foras na Gaeilge are also withdrawing funding from another Web Site used extensively throughout the world beo.ie which will make it very difficult to continue! The unenviable record of Foras na Gaeilge is thus added to as they continue on this incomprehensible destruction, without replacement, of the Irish Language media, at least three newspapers and some other periodicals.)

The most alarming and disgraceful part of this is the lack of communication from Foras na Gaeilge with the Comhdháil, and the other organisation whose employees work is so little appreciated that they have given no advice or shown any concern for the future of these dedicated people.

The Board of Comhdháil Náisiúnta na Gaeilge had little choice but to wind down the operation and organisation in an orderly way until the funding was finally withdrawn from it at the end of June.

Today we have seen terribly sad pictures being tweeted of a skip being filled with the ruins of 71 years of voluntary and dedicated activity!

Nobody denies that the organisation of the voluntary sector in the language movement should be rationalised but the unthinking bureaucracy which so recklessly wielded the axe leaves an angry and untrusting public. This could be seen when up to 10000 people marched through Dublin in February, a thousand marched in Conamara later in February, thousands also marched in Belfast in April and smaller gatherings took place in other venues. Part of the reason for these marches was the Governments' policy or lack of policy for the National Language.

The Irish people should be greatful to the staff of Comhdháil Náisiúnta na Gaeilge and their dedicated work over the past seventy years. That has now been lost because a lack of appreciation or indeed understanding of Foras na Gaeilge.

These are the sad pictures from Kildare Street today! 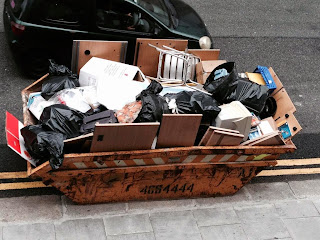 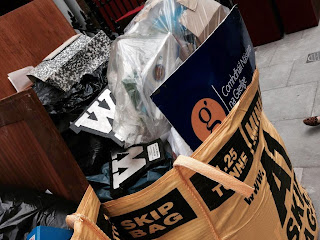