The President of Ireland is to be presented with a copy of this book by the Author on 16th June 2016 at Aras an Uachtaráin.

The Judge placed the black cap on his head and a deep silence filled the courtroom.

"The sentence of this court is, and I do judge and order that you, Myles John Joyce, be taken from the bar of this court where you now stand to the place from which you came, and that you be removed to her Majesty's prison at Galway, and that on Friday the 15th day of December next of this year of Our Lord, 1882, and you be taken to the common place of execution, within the walls of the prison in which you shall be confined, and that you shall there be hanged by the neck until you be dead, and that your body be buried within the precincts of the prison in which you shall last be confined after your conviction.

And may the Lord have mercy on your soul."

There was a stunned silence before hesitant applause broke out.

This was probably the most moving moment at the launch of a book by Seán Ó Cuirreáin, "Éagóir - Maolra Seoight agus dúnmhairithe Mhám Trasna." A meticulously researched account of the most horrifying murder of almost every member of a family in a remote part of what was then North Galway and the subsequent trial and conviction of neighbours and relations. These events attracted such interest far and wide that it eventually contributed in no small measure to the downfall of the British Government of William Gladstone.

The book launch was made more poignant by the fact that it occurred in the actual courtroom in which these men, most of whom were unable to comprehend what was going on. They had no English, nor any knowledge of the British legal process.

The historic courthouse which saw the trials of Wolfe Tone, Robert Emmet and John Mitchell now saw these eight men arraigned before a hostile legal system which made little or no effort to understand the position of these "wretched Irish-speaking creatures" - to use the words of Defence counsel. 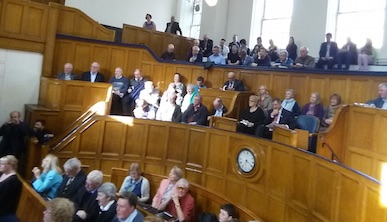 Today there is little change in physical make-up of the courtroom.

There, the Dock where the eight accused stood uncomprehendingly. There, the witness boxes where perjured testimony was delivered. Below the table where the barristers sat and on which the only survivor, a 9 or 10 year old boy, stood before being dismissed, with out questioning on the events of that fateful night. Over there the jury box with twelve "good men and true" with absolutely no knowledge of the life or language of people living on a mountainside in the west of Ireland might be. And there the bench where sat the Honourable Judge Barry.

A former Minister for the Gaeltacht, Éamon Ó Cuív spoke of the injustice that lead to the hanging of Maolra Seoighe (Myles Joyce), an injustice visited to a lesser extent in terms of result but nevertheles a State inflicted injustice familiar to Irish speakers to this day. He drew a comparison between the last recorded words (translated) of Myles Joyce with those of St Thomas More. "I am going befor my God, I was not there that day. I had not hand or part in it. God forgive those who swore against me...." And More: "Tomorrow, long I to go to God....In good faith, Mr. Rich (who bore false witness against him), I am more concerned for your perjury than my own danger"

A descendant of the murdered family Johnny Joyce, a Dublin footballer spoke briefly about the story as it came dowm through his own family and of forgivness for those who actually committed the murder.

Then, from the Jury Box, Seán Ó Cuirreáin read an extract form the book which terminated with the enacting of the Trial Judge' condemnation and the dramatic sentencing.

Despite much pleading, three of the eight were hanged including the incontrovertibly innocent  Myles Joyce. The final chilling response from The Lord Lieutenant of Ireland, "The law must take its course!" sealed their fate.

That there was an injustice done is not in doubt in the case of Myles Joyce but the British Justice system is always loath to row back on judicial decisions in law. Remember the phrase of the English Master of the Rolls of an "appalling vista." and "It cannot be right that these actions (appeal of Birmingham six convictions) should go any further."

Several British Peers, the late Lord Avebury and Lord Alton, whose Mother was herself from the Tuar Mhic Éadaigh Gaeltacht, the parish of Mám Trasna, have been active on the case. Indeed the British Minister of Justice is convinced of the validity of the case but is unwilling to act unless there is sufficient interest.

Hopefully this publication will strengthen the case.

• I have written my own comments on this book now on my personal blog:  Géileadh don dlí - cóir nó éagóir! (Submit to the law - just or unjust!)