The 2016 Annual Report of An Coimisinéir Teanga (Bilingual) shows that 2016 saw the highest ever number of complaints and requests for advice from the public since the establishment of the Office in 2004. "This high number of complaints was not brought about by any one particular matter. I believe that this demonstrates the enduring difficulties encountered by the population in general, and by the Irish-speaking community in particular, in accessing satisfactory state services through Irish, " he states in this report.

A total of 768 complaints were made to the Office during 2016. Almost a third of the complaints received by the Office related to services which are covered by language schemes. This area includes services such as websites, on-line systems, application forms and interpersonal services. In addition, there was a substantial increase in the number of complaints concerning the lack of Irish on signage and stationery.

The highest number of complaints came from those living in Dublin (45%), a slight increase from 2015, and one in five complaints derived from Gaeltacht areas.

The Annual Report contains extensive accounts of the formal investigations completed during the year and of the monitoring work carried out by the Office.

New Act headings
The Department of Arts, Heritage, Regional, Rural and Gaeltacht Affairs recently announced the new heads of the Official Languages (Amendment) Bill 2017. An Coimisinéir Teanga welcomes the provisions of the new heads as they substantially address the recommendations made heretofore aimed at strengthening the Official Languages Act. These heads are a mark of progress, and implementation is now needed to achieve the aspirations they set out.

An Coimisinéir Teanga recognises that the publication of the new heads is just the first step in a process to make substantial and constructive changes to the Official Languages Act. Minister of State Seán Kyne TD is to be praised for making a good start to this process and it is now hoped that the work will be brought to fruition in the coming months. An Coimisinéir Teanga wishes Minister of State Joe Mc Hugh TD the best in this endeavour and intends supporting this work in a manner beneficial to the wider public. 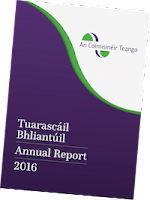 The proposal to replace the system of language schemes with a regulations-based system is highly significant. This would fundamentally alter the structures currently in place for provision of State services through Irish and is in accordance with the recommendation contained in the commentary on the operation of the Act published by An Coimisinéir Teanga in April of this year. The evidence presented in that commentary showed that the language scheme system more often than not weakens and reduces the provision of State services through Irish. An Coimisinéir Teanga stated at that time that: “A new system is needed, based on direct regulations applicable to public bodies depending on their level of contact with the public, in order to comprehensively and systematically improve service provision in the Irish language.”

It is a fundamental fact that satisfactory provision of services through Irish is dependent on sufficient numbers of Irish speakers being employed in the Public Service. The current recruitment system is not achieving this objective. The proposal in the heads that 20% of new recruits into the Public Service must have Irish is to be welcomed. With proper planning, such a policy and statutory obligation should give hope to the Irish language community that an improved standard of service in Irish will be forthcoming from the Public Service.