Thousands of people have fled the area of Iorras Aithneach area due to unemployment.

This area is in the largest Gaeltacht District in the country, Conamara, and is situated on the western shore of Cill Chiaráin Bay stretching almost from Doire Iorrais in the North to Carna and its environs and islands in the south. The whole area is often referred to as the Carna/Cill Chiaráin area (See map at bottom of page). People in this area look with askance, if not with out right cynicism, at boasts from the Dublin government of rising employment rates. This area is looking at abysmal to non-existant figures of employment.

It appears that the words of the Anglo-Irish poet, words from who's famous poem on "Sweet Auburn," entitle this piece, are to ringing true once more:

The complexity of the way things are not really helping. Údarás na Gaeltachta, the cash-stretched development for the Gaeltacht has however instigated a Marine Park at Cill Chiaráin. Planning for such an enterprise must be submitted to the Local Authority and during the planning process people not from the area are opposing the initiative.

The local community have set up a committee recently, Jabanna do cheantar Iorras Aithneach (Jobs for Carna). This committee has a facebook page to support the Údarás plans.

The committee is two months old and one of the first steps decided upon was to implement a support petition for Páirc na Mara (Marine Park) in Cill Chiaráin. This was both on paper (for those many people in the area who are unable to get broadband cover) and on-line.  If you haven't signed already your signature would be appreciated. Tacú le Udarás na Gaeltachta & Páirc na Mara i gCill Chiaráin! (Support Marine Park!)

The committee has achieved the goal of 1000 signatures to support Údarás na Gaeltachta’s development of a Marine Park in Cill Chiaráin, Co Galway by getting over 1250 signatures. According to a report carried out by the local secondary school Scoil Phobail Mhic Dara in Carna and the Carna/Cashel GAA club, 70% of the young people from our area have left in the last 30 years and this loss has to stop for the Iorras Aithneach (Carna/Cill Chiarán) area to survive.

The committee chairman Mícheál Ó Cadhain says, “I see the Marine Park as one aspect of creating local employment and I very much welcome it”.

Colm Ó Neasa, committee secretary, sees the amount of signatures for the proposed Marine Park and the plans that Údarás na Gaeltachta have, as a positive sign that the local community strongly endorse these development plans.

"In the upcoming weeks we will be looking at ways to increase employment in the area and will want to meet with Údarás na Gaeltachta, Galway County Council and local politicians to determine the best method to move forward. It is extremely important that the petitions do not go unnoticed and the committee will make every effort that this is so."

The committee is grateful all the people who signed the petitions, whether on paper or online. This is proof that there is support for the Marine Park and the vision to create more local employment.

John Healy, the incomparable "Backbencher" in the Irish Times wrote a book on his home place in the Eighties. It is an instructive read and indeed tragically "No one shouted Stop!' is relevant  of many places in rural Ireland. In Iorras Aithneach the local people ARE shouting stop.

Is anybody willing to listen and act? 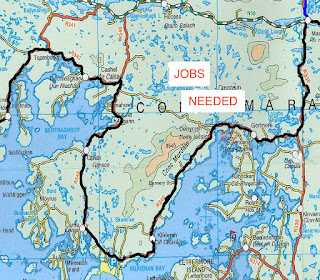